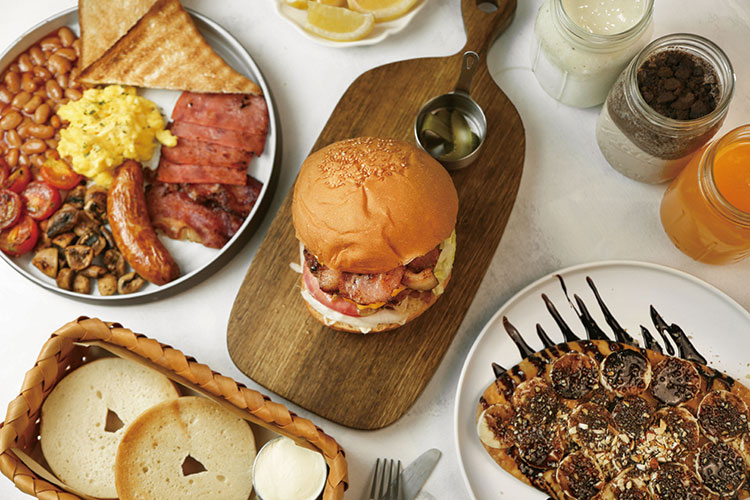 Article By Jin and Francis

This year, it seems like new brunch places have opened up faster than international travel. However, Beaver’s has certainly distinguished itself from the rest. First of all, and most obvious, it filled with Canadian goodness. Whether it is the Canadian food they serve, the Canadian decorations they display, the Canadian goods they sell, or the good ole-fashioned Canadian friendliness, Beaver’s is a whole lot of Canada right here in Xi’an.
The first thing we need to mention is, of course, the poutine. What could possibly be more Canadian? A healthy portion of deliciously unhealthy freshly-fried French fries drenched in thick gravy – what more could you want on a cold wintry evening? It was absolutely delicious. Well, it was topped with cheese, not cheese curds. We will forgive this slight adaptation given that the owner spent time in Halifax in Nova Scotia, not Quebec.
We started off with drinks, including an Oreo milkshake and a seasonal pumpkin spice latte with lots of cinnamon and topped with caramel and fresh whipped cream.
The salad we tried was the “scotch egg”, which was delightful. A scotch egg is an egg wrapped with sausage meat, breaded, and fried. the egg was warm and pleasantly still soft in the middle. Topped with shredded parmesan, and dried cranberries, this seemed perhaps less common among salads in Xi’an.
One thing we noticed is that the rhythm of serving was expeditious. The dishes were brought out as they were ready, so all of our food was served hot and fresh. The seafood chowder with shrimp, mussels, finely cut carrots, button mushrooms, celery, and potato was light and great for brunch.
The eggs benedict came perched on actual sliced English muffins. How many places in Xi’an do that? With thick, rich hollandaise sauce on top and a layer of spinach and caramelized onions, this is a must-have brunch classic. As a sweet treat, we tried a traditional beaver tail, a kind of fried flat dough topped with butter and maple syrup. If you have a high-maintenance sweet-tooth, this will surely satisfy your craving.
Because we were actually there at night, we can confirm they do in fact serve brunch all day. We also tried a burger, a generous beef patty with two fat strips of bacon, a melty slice of cheese, tomato, onion, and pickles on the side. The burger was a bit tall, which would have made it messy if not for the cocktail sticks. While we didn’t try them, we also noticed that there were club, blt, and grilled cheese sandwiches on the menu. We will need to return some other time to try those.
They have ample seating, including a loft area, bar-stool seating at their counter, and a larger table for groups. We most appreciated the attention to detail throughout the meal. for example, the gloves provided to eat the beaver tail were very nice food-handling gloves, not the flimsy, thin cheap plastic most force their patrons to use.
Something else worth noting – they just opened this past June and are located in a mall which used to be a large towel factory. The whole compound has an industrial revival vibe, while the restaurant itself takes advantage of big windows and is in the style of a neat and tidy coffee shop with a general store.
When you check it out, let us know what you think!

Jin and Francis are both teachers in Xi’an and we love exploring food. They can be contacted at jin@xianease.com and francis@xianease.com

If you give this a try, let us know about your experience by messaging us at reviews@xianease.com.